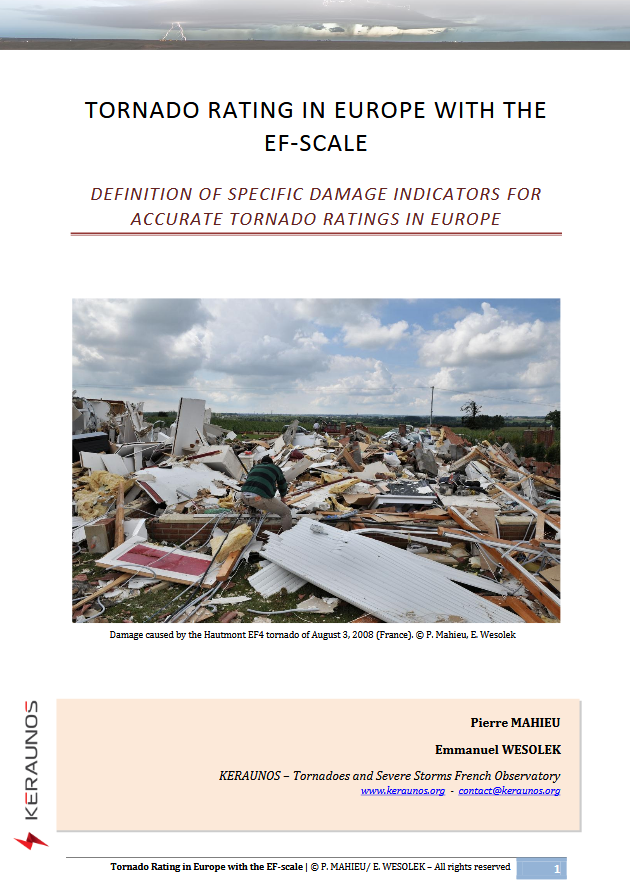 The publication opens with an introductory statement, which explains the characteristics of the EF-scale - implemented in 2007 in the United States - and specifies what distinguishes it from other tornado intensity scales, the Fujita scale (1971) and the Torro scale (1975). This allows to better understand the choice made by Keraunos in 2009 to use this scale as a reference for French tornadoes ratings: an original choice compared to what has been observed elsewhere in Europe, and in particular within the ESSL (European Severe Storms Laboratory), where the exclusive use of the F-scale and T-scale has remained the norm.
The publication then details the methodology used by the two authors of the study in order to guarantee a good adaptation of the EF-scale on the European continent. This work, which is precursor in Europe and based on the analysis of several hundred tornado cases, led to the identification of 24 European damage indicators, in addition to the 28 indicators already defined by the Americans. This makes it possible to overcome the uncertainties related to the F-scale and T-scale, and thus to accurately determine the intensity of tornadoes on the European continent. This approach also allows to make tornado ratings in Europe comparable to those carried out on the North American continent.
The publication finally details each of the 24 new damage indicators, to ensure a precise and easy use during ground surveys. Each of them is detailed in a form, which specifies the definition of the indicator, the various degrees of damage associated with it, the recommended usage tips and finally some photographs of typical damage, resulting from tornado cases occurring in various European countries. This work, presented in an initial version in 2011 during the 6th European Conference on Severe  Storms, have since been partially reused by the meteorological services of Canada in 2013, then presented in various colloquiums and in particular during Keraunos seminars.