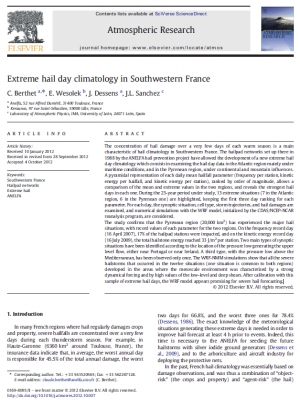 The concentration of hail damage over a very few days of each warm season is a main characteristic of hail climatology in Southwestern France. The hailpad networks set up there in 1988 by the ANELFA hail prevention project have allowed the development of a newextreme hail day climatology which consists in examining the hail day data in the Atlantic regionmainly under maritime conditions, and in the Pyrenean region, under continental and mountain influences. A pyramidal representation of each daily mean hailfall parameter (frequency per station, kinetic energy per hailfall, and kinetic energy per station), ranked by order of magnitude, allows a comparison of the mean and extreme values in the two regions, and reveals the strongest hail days in each one. During the 23-year period under study, 13 extreme situations (7 in the Atlantic region, 6 in the Pyrenean one) are highlighted, keeping the first three day ranking for each parameter. For each day, the synoptic situation, cell type, stormtrajectories, and hail damages are examined, and numerical simulations with the WRF model, initialized by the CDAS/NCEP-NCAR reanalysis program, are considered.

The study confirms that the Pyrenean region (20,000 km2) has experienced the major hail situations,with record values of each parameter for the two regions. On the frequency record day (16 April 2007), 17% of the hailpad stations were impacted, and on the kinetic energy record day (16 July 2009), the total hailstone energy reached 33 J/m2 per station. Two main types of synoptic situations have been identified according to the location of the pressure lowgenerating the upper level flow, either near Portugal or near Ireland. A third type, with the pressure low above the Mediterranean, has been observed only once. TheWRF-NMMsimulations showthat all the severe hailstorms that occurred in the twelve situations (one situation is common to both regions) developed in the areas where the mesoscale environment was characterized by a strong dynamical forcing and by high values of the low-level and deep shears. After calibration with this sample of extreme hail days, theWRF model appears promising for severe hail forecasting.