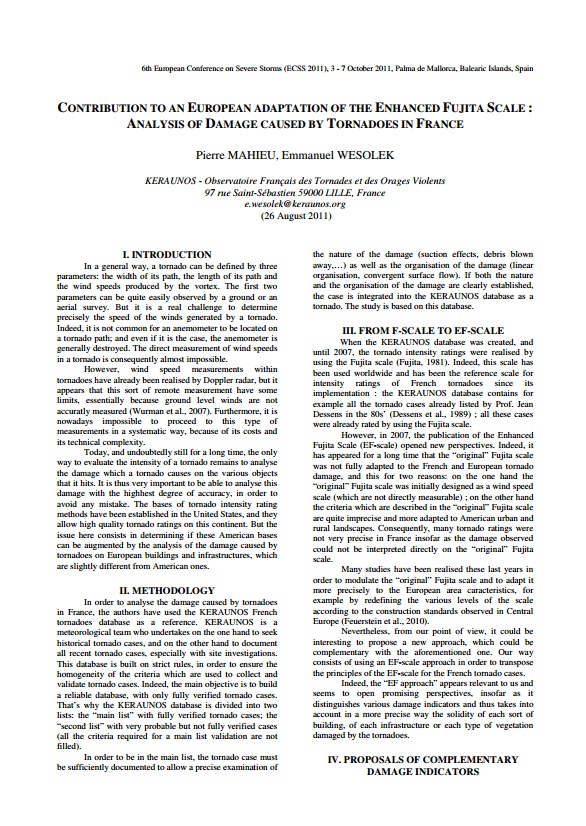 In a general way, a tornado can be defined by three parameters: the width of its path, the length of its path and the wind speeds produced by the vortex. The first two parameters can be quite easily observed by a ground or an aerial survey. But it is a real challenge to determine precisely the speed of the winds generated by a tornado. Indeed, it is not common for an anemometer to be located on a tornado path; and even if it is the case, the anemometer is generally destroyed. The direct measurement of wind speeds in a tornado is consequently almost impossible.
However, wind speed measurements within tornadoes have already been realised by Doppler radar, but it appears that this sort of remote measurement have some limits, essentially because ground level winds are not accuratly measured (Wurman et al., 2007). Furthermore, it is nowadays impossible to proceed to this type of measurements in a systematic way, because of its costs and its technical complexity.
Today, and undoubtedly still for a long time, the only way to evaluate the intensity of a tornado remains to analyse the damage which a tornado causes on the various objects that it hits. It is thus very important to be able to analyse this damage with the highhest degree of accuracy, in order to avoid any mistake. The bases of tornado intensity rating methods have been established in the United States, and they allow high quality tornado ratings on this continent. But the issue here consists in determining if these American bases can be augmented by the analysis of the damage caused by tornadoes on European buildings and infrastructures, which are slightly different from American ones.